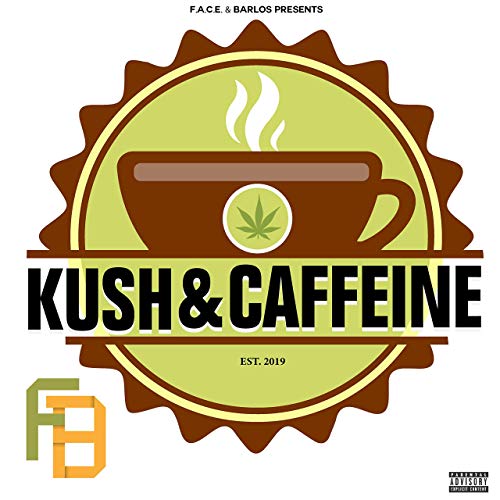 F.A.C.E & Barlos drop a new album titled “Kush & Caffeine” I loved  how the introduction song had added elements from island music & Hip Hop roots, The duo has created a friendly chemistry together as the underlining energy is fun which makes you want to listen. From 1st glance the album cover was well put together and the logo spoke right to the core audience, This 7 song Ep is a solid ride for the fans of music & Hip-Hop period again the production set the tone for this project as you never could predict the next sound.

The 1st song on the album titled as the EP “Kush & Caffeine” starts of with high energy verses and compact flow, The hook was a reflection of the drug world and how the medicinal  community and hard drugs has always been blended within the music culture. I especially liked how each artist was able to show their personality as the album continues giving us a more complete overview of the album and the artist as a whole. “Trapatio” was full of latin and island elements that helped transcend the album to trap wave sound, The rapid rhyme scheme made it even more high energy and entertaining.

Next in rotation”The Grim Adventures of “FACE & Barlos” had a dark overtone to it with fun attributes added to top of the merging sound. The artist have continued to prove themselves lyrical with a rapid cadence approach. What I love about this album is the way each song stays within the concept but drastically able to change. Blood sweat and tears says grind until we die the message is clear both these artist make this album come to live.  “Smooth Criminals” is just that I love the Spanish and melodic sound created I can forsure see this played on the radio in many different formats.

“Bandera” meaning the flag was beautifully put together the HipHop scratching elements and the Latino rap with soothing jazz sound made this a a standout track. The production continues to show why it is one of the most important elements in creating cohesive album tracks, Representing for their familia & culture. Its always special to see artist put their city or people on there back it creates a since of loyalty were your fans will resonate with you even more.

“Gone Numb” is a phrase we use when our heart is broken but this song is about that and the numbing from drugs causing depression, you can say these are topics that most of the world does not choose to talk about. regardless of what the message sends it sparks a much needed convo about drug abuse in the inner city & suburban communities. Our Hip-Hop great Mac Miller recently transitioned by an apparent suicide. Stay updated with this duo F.A.C.E & Barlos by adding them on social media supporting new music & video releases.