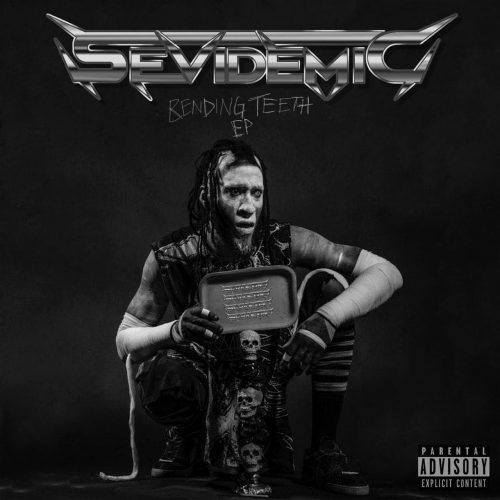 SevidemiC is a rapper from Compton, California that performs his own style of music called “zombie hop”. The man has released a handful of projects throughout the 2010s, but his biggest breakthrough yet wasn’t until this year when he signed to Lyrikal Snuff Productionz & dropped his 7th EP Xenogod this past March. But with Halloween being 6 days away, Sev has decided to give fans yet another EP.

The opener “Groundfall” talks about how he came to fuck shit up over a glitchy yet moody beat & the song “Solipsistia” right after is an annoyingly repetitive club joint which I completely get, but it just doesn’t do anything for this reviewer personally. The next track “Get Off Me” though is a completely off the wall banger both lyrically & sonically while the song “Zedicine” is another party starter like “Solipsistia”, except SevidemiC’s performances are more captivating & the electro-funk instrumental is infectious. The track “Nip / Tucc” is basically a “fuck everyone” anthem over a bassy trap beat with some synths & then the closer “Amen” finds Sev comparing himself to a demon over a skeletal trap beat.

I honestly think I like this EP more than Xenogod. Bending Teeth continues to reveal how unique SevidemiC truly is to LSP’s roster with it’s synth/trap production as well as his lyricism continuing to step up. Definitely looking forward to his full-length debut with the label even more now.