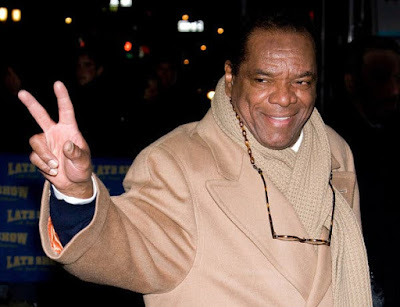 If you’re a person born in the 1980s you were blessed to see actor and comedian, John Witherspoon really reach his prime. A comedians comedian, Witherspoon had the rare ability to make almost every line he said a potential quotable. For many “Bang, Bang, Bang,” was his catchphrase as he used it playing Pops in The Wayan’s Bros sitcom although that routine was done years earlier in his role in Robert Townsend’s 1987 film “Hollywood Shuffle.” His first major role was that of Ice Cube’s father, Willie Jones in the Friday series and even tough he continued to do cameos and supporting roles, he managed to reintroduce himself to a new generation playing the voice of Grand dad in Aaron Mcgruder’s “Boondocks” cartoon.
Born John Weatherspoon in Detroit, Michigan on January 27, 1942, he was one of 11 children. His elder brother William became a songwriter for Motown, writing the lyrics to the 1966 hit song “What Becomes of the Brokenhearted.” Witherspoon had an affinity with music as he was proficient in playing the Violin, French Horn and the Trumpet. Starting his career as a model he began to drift towards comedy in the 1960s where he would meet and come to be associated with other comedians such as Tim Reid, Robin Williams and Richard Pryor. His first television appearance came in the 1970s CBS show “Barnaby Jones” starring Buddy Ebsen. Witherspoon played a drug and alcohol counselor in his role. From there he made guest appearances on “Good Times,” “What’s Happening,” and “The Incredible Hulk” in 1977. In 1982 he guest starred on WKRP Cincinnati playing Detective Davies alongside his friend, Tim Reid.
From 1980 onward he made his many bit parts in movies rather memorable, from the reverend in Keenan Ivory Wayan’s “Im Gonna Get ya Sucka” to Mr Strickland in 1990s “House Party,” although for me personally, he stole the show playing David Allen Greer’s father, Mr Jackson in Eddie Murphy’s 1992 film “Boomerang.” In 1995 he solidified himself as Pop’s William’s in “The Wayan’s Bros” alongside Shawn and Marlon Wayans. Each week he managed to push the comedy even further with his patented over the top delivery.
Continuing to do both movies and film, John Witherspoon was a comic staple throughout the 90’s and 2000s doing guest spots on “Martin” and “The Fresh Prince of Bel Air” to a stint on the short lived Tracey Morgan show, followed by voiceovers for Disney’s “The Proud Family” and “Kim Possible.”  He found a solid gig again playing Lloyd in 31 episodes of comedian Slink Johnson’s show “Black Jesus” alongside other comedians Corey Holcomb and the late Charlie Murphy.


John Witherspoon constantly toured doing standup comedy all across the country until his death. He passed on October 29th, 2019 at his home. He is survived by his wife, Angela Robinson who he had been married to since 1988 and his 2 sons, JD and Alexander. As news broke of his passing many came to show their condolences, from a fan perspective it feels like 2 generations worth of people lost an uncle in a single moment.