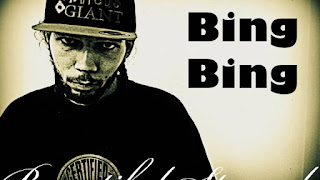 How many artists out there are frustrated? I mean, let's admit it. Doing the work. Performing the art. Recording the music. Whatever it is as far as production goes IS NO PROBLEM for the artist who has a genuine desire for these type of things. What we are frustrated about the most is the lack of opportunity. When we sincerely give our best out of sheer passion yet lack the means and resources to successfully get our point across.
If you take a look around everything that is happening in and around Pasadena, California right now, it's chaos. A circus. Especially in the local politics portal. Aside from how the City of Pasadena poses a constant threat to it's own local culture & heritage in the name of money and taxation, majority of native, local rap artists simply don't embrace what the 'Pasadena Music Scene' has set out to do.
Pasadena artist extraordinaire Bing Bing, whose played a major role on Pasadena's local music scene over the past 8 years, has been overlooked by nearly everybody. Through his sincere efforts to create a unified local music scene through the Bringing It Together movement, local artists have instead created their own 'unity movements'. But, Bing Bing claims that the Pasadena Music Scene has interest in every local, native, independent artist. No favortism and unbiased. I guess the question is why would local artists create a new 'unity' movement if they're too good to work with the one that has already laid much of the foundation.
What gives Bing Bing and the Pasadena Music Scene credit and certification for being the official platform for local music in DENA is that they arguably boasts the largest archive of local, native artists and content. Through ThaWilsonBlock and Pasadena Music Scene, there have been over 20,000 files (mixtapes, singles, albums, covers, etc...) served, over 100+ exclusive interviews with NATIVE artists, countless magazine & newsletter covers, and all types of other promotional content. With all due respect to other local platforms that cater to local artists in the Pasadena / Altadena region, it seems as though people see ThaWilsonBlock for what it is but simply choose not to embrace it...for whatever reason. Another thing that certified the Pasadena Music Scene through Bing Bing's efforts was his consistency and actually living in the City of Pasadena. In fact, most people know that Bing Bing wasn't born in Pasadena. But, the local music scene he's created was no fly-by-night. It's been a walk. A journey. And he is and has been proactive on the streets of Pasadena, California everyday.
After the creation of DENA artists' new 'unity' movement, Bing Bing saw it as an opportunity to evolve. First taken as an insult, he quickly realized that majority of the same artists who claimed unity on the local music scene would/could never happen were the same ones who 'chose' not to participate in the #BringingItTogether movement. For the longest, Bing never let it get to him enough to put the music scene project down. But, after the message was sent loud & clear, Bing Bing dropped the 'Pasadena' Music Scene for the 'United' Music Scene and has connected with producer Lyndrum to curate content for local artists across all music scenes.
Through Bing Bing's frustration, he still manages to somehow come out on top of things. On Saturday August 20th, 2016, Bing Bing released the Beautiful Struggle mixtape, after taking 3 years off to interview artists on the local music scene. He claims that the project isn't exactly what he envisioned it to be, but it encompasses everything that the 'beautiful struggle' is. Unfinished mixes. Pitched vocals. Unbalanced panning. Unmastered. And that is how Bing Bing finds victory even in his failures.
The first track off of the Beautiful Struggle mixtape is "Welcome to tha Beautiful Struggle" where Bing Bing double-time raps about how local artists don't see his vision for a unified music scene. The intro track also targets the attention of kids, children, & teenagers who are all ready to be influenced by something/someone. The message to them is that it's never too early to make a plan for your life. Find your passion and pursue it at all costs. You've got to work hard to live up to your potential. Otherwise, welcome to the beautiful struggle.
If you like this track, please share it with a friend and leave a comment. You can show support for Bing Bing by purchasing ThaWilsonBlock Magazine SPECIAL EDITION presents "Welcome to tha Beautiful Struggle" by Bing Bing digital download that contains exclusive free download links and lyrics to all the songs. There is also a link to download the whole mixtape as well. All for free.

By Mistah Wilson at August 26, 2016 No comments: Links to this post 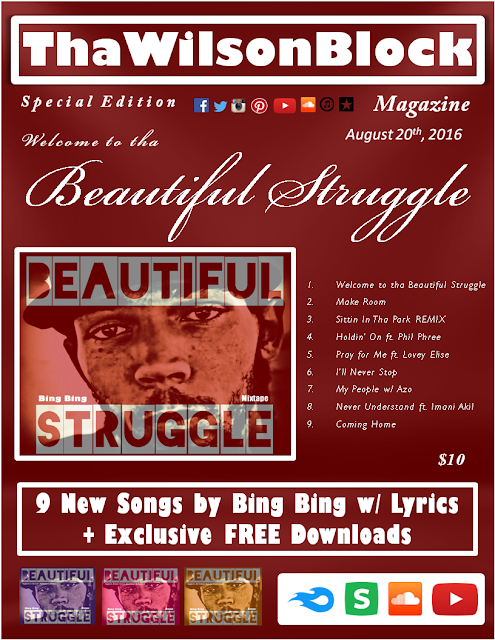 By Mistah Wilson at August 23, 2016 No comments: Links to this post 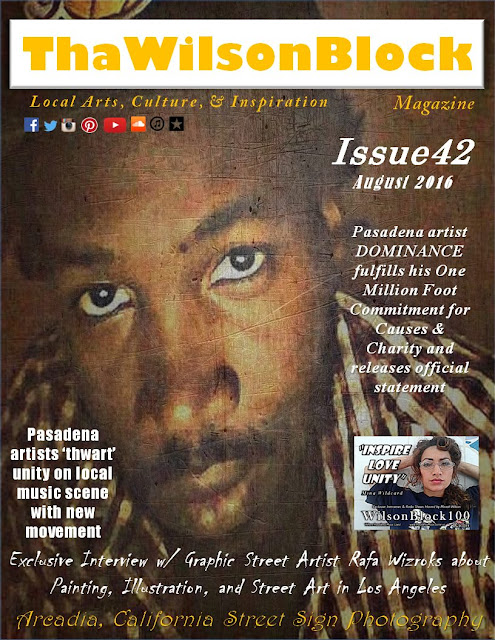 By Mistah Wilson at August 16, 2016 No comments: Links to this post